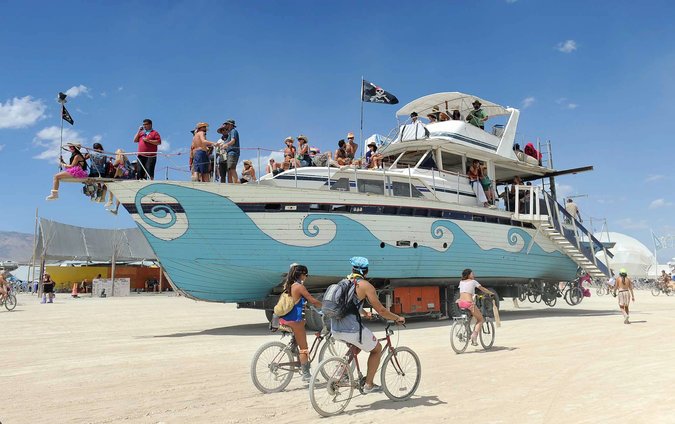 Stephenson, who was in his late 50's, had been staying in Gerlach, a small community just outside of the one that houses Burning Man each year.

Burning Man has issued a statement about Stephenson's death, which can be read below:

Burning Man announced today the loss of beloved Department of Public Works staff member Scott “Spoono” Stephenson. Spoono passed away overnight on the playa, in the city he loved most.

Stephenson was in his late 50s and died of apparent natural causes, according to Pershing County officials. Stevenson had been in Gerlach and on the playa since April supporting construction of Black Rock City. His passing will have an enormous impact on the Burning Man community.

“Spoono has been a fixture of our DPW since 2005,” said Burning Man CEO Marian Goodell. “In 2005 he was one of the first to depart for Mississippi to help residents in the wake of Hurricane Katrina, working, among other things, as a cook for the team that grew to become Burners Without Borders. He will be missed by many of us including myself.”

Spoono was a founding crew member of Black Rock Solar, working tirelessly to install solar arrays across Nevada for those who would benefit most – schools, hospitals, tribes, and other non-profit organizations – for six years. He’d been a Runner for DPW’s purchasing department for 10 years and cooked for work weekends for equally as long, as well as handling cooking for early arrival crews on the ranch for several years. He was on point to cook for the Man crew when we had to rebuild the man in 2007.

Spoono embodied the best of Burning Man values and culture. He was generous to a fault, giving all that he had to the community he loved. He will be missed by all who knew him.

Burning Man is providing support and grief counseling to staff and volunteers on the playa during this difficult time.

Plans for a celebration of life and memorial service will be announced shortly.

As thunderstorms sweep through Nevada, the annual festival's opening day was cancelled by organisers. This year's edition of Burning Man has been plagued by bad weather, with organisers closing the festival on its opening day.

This year, roughly 30,000 Burners will descend on Black Rock City for the most transformative week of their lives. But if you don’t already have a ticket to Burning Man 2016, odds are you won’t be one of them.

Your Guide To Surviving Burning Man

This year’s edition of Burning Man is creeping up fast, with Black Rock City’s annual celebration of all things weird and wonderful kicking off on August 30.

Burning Man From The Sky

Drones are the future, whether we like it or not. The government has been using them for years now, but the civilian sector has just now begun to burgeon. Festivals are investing and, in turn, are being rewarded with footage and pictures only previously possible via helicopter.