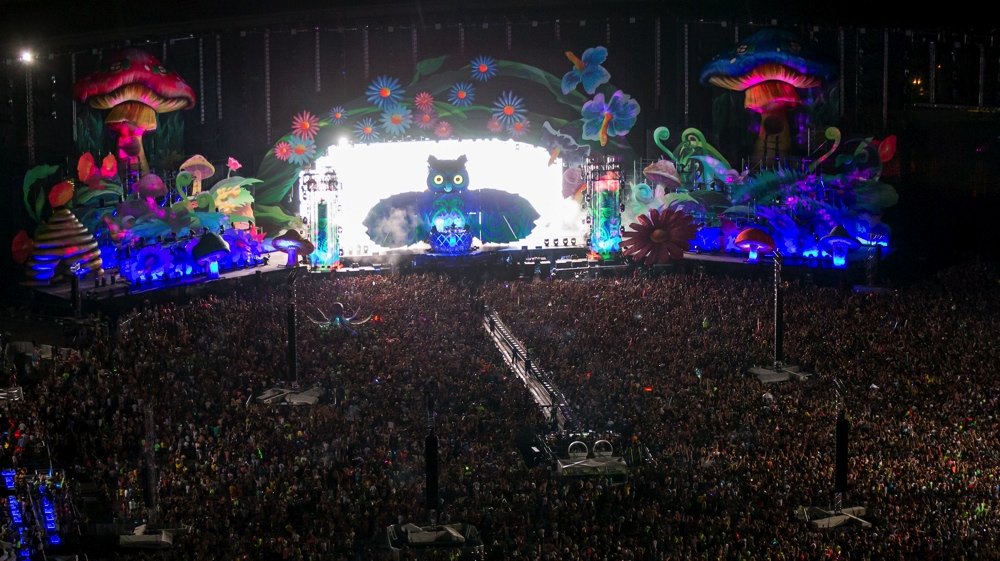 While size always matters when it comes to stage design, EDC Las Vegas’s Main Stage not only went much bigger than in previous years, but also much better – creating a surrealist landscape that was oversaw by a massive Insomniac owl. Repositioning the Main Stage into an area that was self contained by massive sound barriers and art installations the sea of people in front of the stage found ample area to move despite the festival’s record-setting attendance. The parallels to Tomorrowland’s famous Main Stage were, of course, also hard to miss.

Bass Pod finds a new home on the Speedway

In order to make way for the much larger Main Stage, dubstep’s Bass Pod (which has lived in two different locations in the last two years), is now strategically positioned in the far opposite corner of the grounds. The stage not only changed locations, but like much of the festival it also expanded in size and scope. Low end wobbles permeated far enough to invite in fans of bass music, but not too far to interrupt the goings-on of Circuit Grounds.

A stage once relegated to a a small size and a bit of an out-of-the-way location, Neon Garden donned a new skeletal structure and impressive scale of sound for the stage that used to just be “that one over on asphalt in the corner.” It helped that Richie Hawtin’s Enter concept owned this space on night one, with DJs like Loco Dice, Hobo, Matador, Victor Calderone, and Hawtin himself testing out the depths of Insomniac’s sound system.

There were more ferris wheels, there were more zany art installations, and there were certainly more sights to take in that ever before. Pasquale’s events have been interactive from day 1, but the newish emphasis on fans as the headliners really gave Insomniac a reason to dig deep into their creative brains for new ways to wow fans between stages.

The Armed Forces chip in

Traffic has always been one of the bigger issues Insomniac has faced, but this year they convinced the nearby Nellis Air Force base to open up its service roads to alleviate some of the traffic concerns. So far, it’s really seemed to make a difference. We’d estimate that travel time to and from the Strip has been almost cut in half for festivalgoers.

Day 2 came and went as the halfway mark for the three day marathon that is the Electric Daisy Carnival and many of us (read: me) were already feeling the effects of partying. Legs and feet were sore, blisters had begun to emerge, and the circles underneath everyones’ eyes were getting just a little bit darker, but it was all well worth it. We’re here to recap all of the second day’s dancing glory for you.