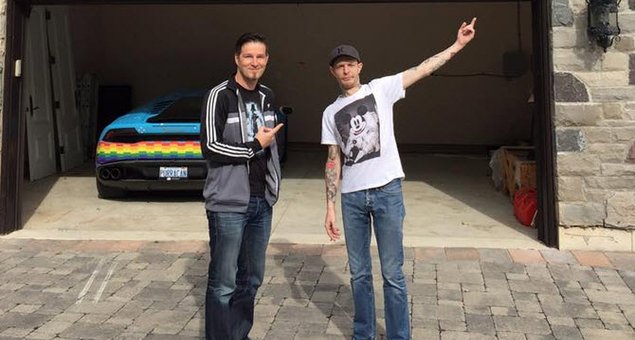 It’s been a while between coffee runs for dance music’s favourite agitator Deadmau5, but today Joel Zimmerman’s revived his YouTube series with a bang. This time, it’s none other than Darude in the passenger seat.

Hit play below and enjoy 40 minutes of Deadmau5 toe-to-toe with Darude as they talk (or struggle to over the noise of Zimmerman’s engine) TV shows, hardware, cars, global warming (“I’m all for it,” Joel says, “If it makes it warmer and less snowy-er”) and snowboarding. And of course, Darude foots the Tim Horton’s bill.

The Finn was in Canada to tour new album Moments, his first full length release in eight years. But even with the new material, Darude still finds room in his sets for Sandstorm: “Contrary to what people believe, I’m not tired of the track,” he tells the ‘mau5. “What I’m sometimes tired of is that [with] every reporter, every interview, that’s the main question always…I like to think that I’ve done plenty of other good stuff as well.”

Watch the full coffee run below.

As part of the 'Coffee Run' series where Deadmau5 goes out to get coffee with another famous DJ, the Mau5man has recently invited Christian Nairn, aka Hodor of Game of Thrones, to go grab a Tim Horton's with him and talk DJing, producing and how Hodor warms his vocals up.

Another day, another customised vehicle in Deadmau5's hands.The Canadian petrol head has given us a peek of his brand new Jeep Wrangler Rubicon - the 'Mau5monster'.

Deadmau5 Took Dillon Francis and Skrillex on a Coffee Run

Deadmau5‘s Coffee Run series has been one of the better things to happen to unfiltered dance music producer speak. You've all seen deadmau5' wildly popular Coffee Run series, but you've never seen it quite like this.

The Coffee Run (The Deadmau5 project) has been a runaway success, getting substantial media coverage. It gives fans a rare glimpse to see how some of their favorite artists interact without a filter (but we all know the deadmau5 doesn’t have one). If you’re not familiar, deadmau5 has been making some pretty big waves with his “Coffee Run” series.

The new Coffee Run from Deadmau5. Super Unexpected, But an Interesting Choice

Following his coffee run with fellow EDM icon Kaskade, the mau5 returns for yet another rendition of his popular caffeine-fuelled series.